It’s always exciting to be able to see our products when fixed in the home so it was great that Matt was kind enough to share the process of his home renovation project,which was completed over a two year period with the majority of the work being done by himself.

The following words are from Matt himself on his project.

The project began at the end of September 2017. I’d bought the house at auction, a former council house. Initially I thought it would take around a year to do, but, with me only able to work on it weekends in between work, it ended up double that as I finished just before Christmas 2019. 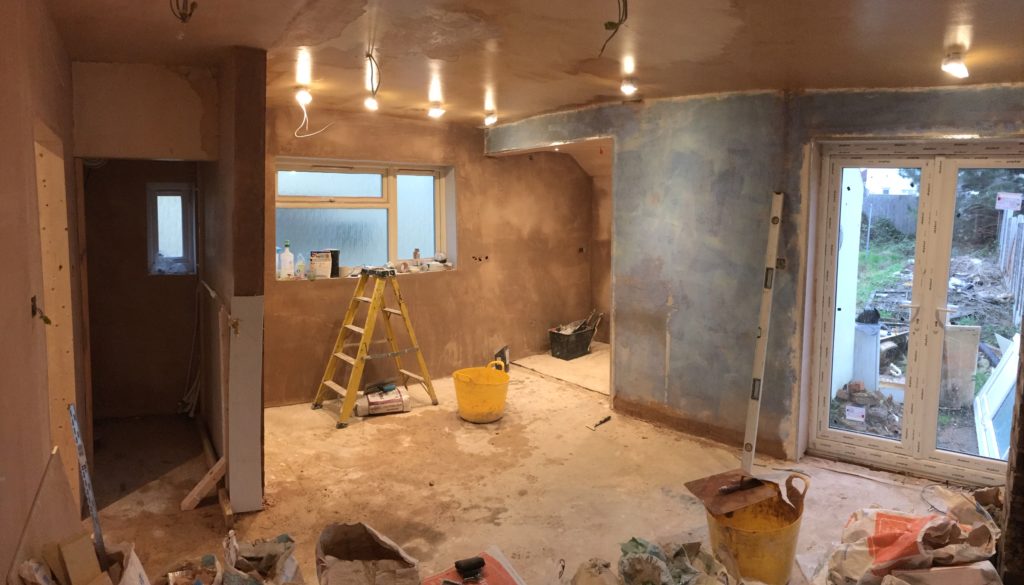 I didn’t really do too much planning, I had ideas but I wanted to be flexible to change. There were a few certainties, including, knocking the kitchen through into what was an outside toilet and coal house. I took out a window and knocked a wall out to make way for patio doors and blocked up an old door to make space for the boiler. Taking out the stair walls to brighten up the space was also a must. 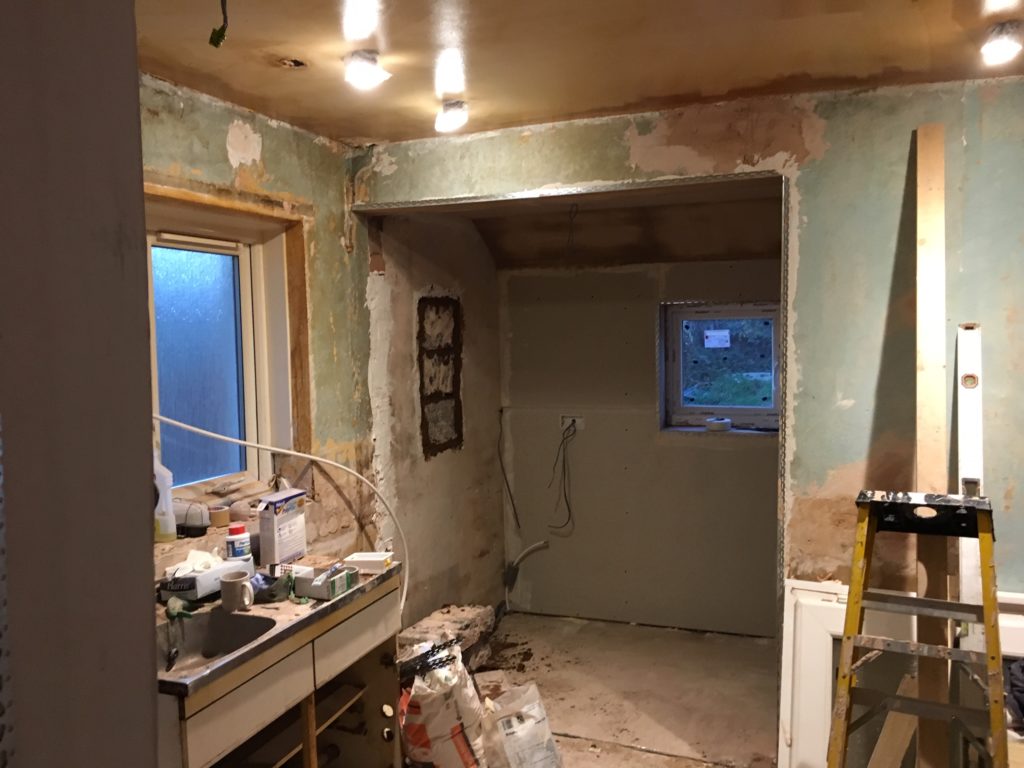 As with most house projects these days, Pinterest was my first stop for ideas and I would save everything I liked on there. Looking through the saved photos there was a definite industrial style throughout the photos. I have always liked the New York/London loft apartment style with exposed brick. I remained causal with the design throughout and even with the kitchen I decided decide until the day what I was actually having. 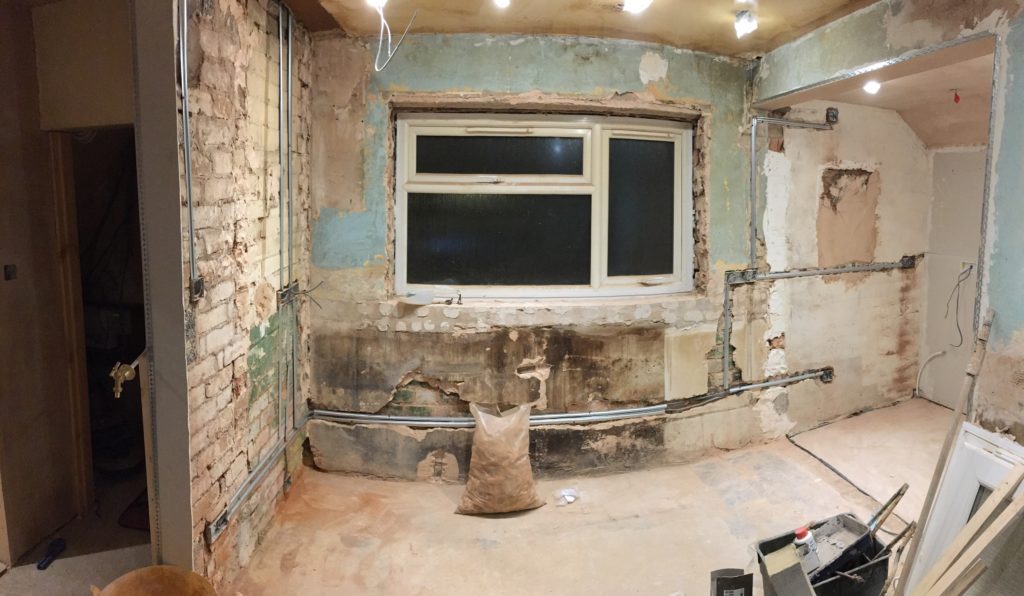 Usually I would know what style I like and then the budget would come into play which would make the selection process easier. As the kitchen is quite long, I ended up having to buy two lengths of worktop which I used the off cuts from to make a dining table and two shelves, as well as the cut out from the sink being used as a coffee table. When you’re working to a budget small savings like that can make a big difference. 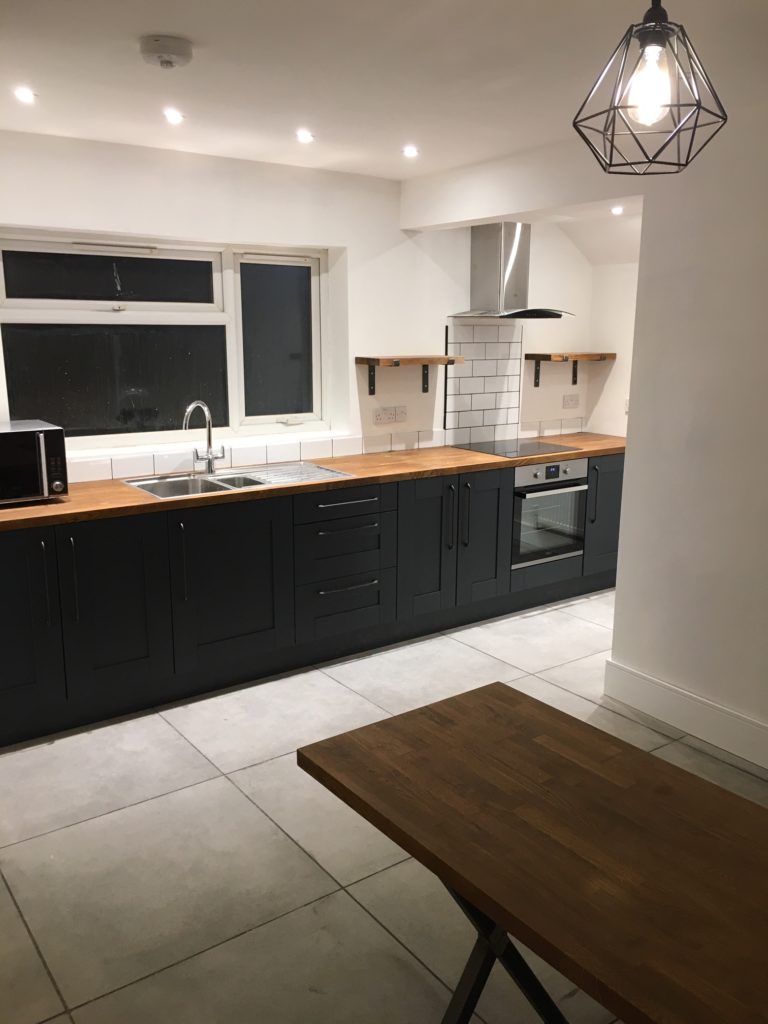 The kitchen wall tiles chosen were the 20x10cm Liso Brillo Blanco which are stylish, yet affordable and they give the kitchen a lot of its personality. I went for a much bigger option with 80x80cm floor tiles; it’s a good job I didn’t choose anything bigger as I only just managed to lay them on my own. The grey porcelain floor tiles will be very durable and suit the industrial scheme perfectly. The 80x80cm Affresco Dark would be a perfect option to create a similar look. 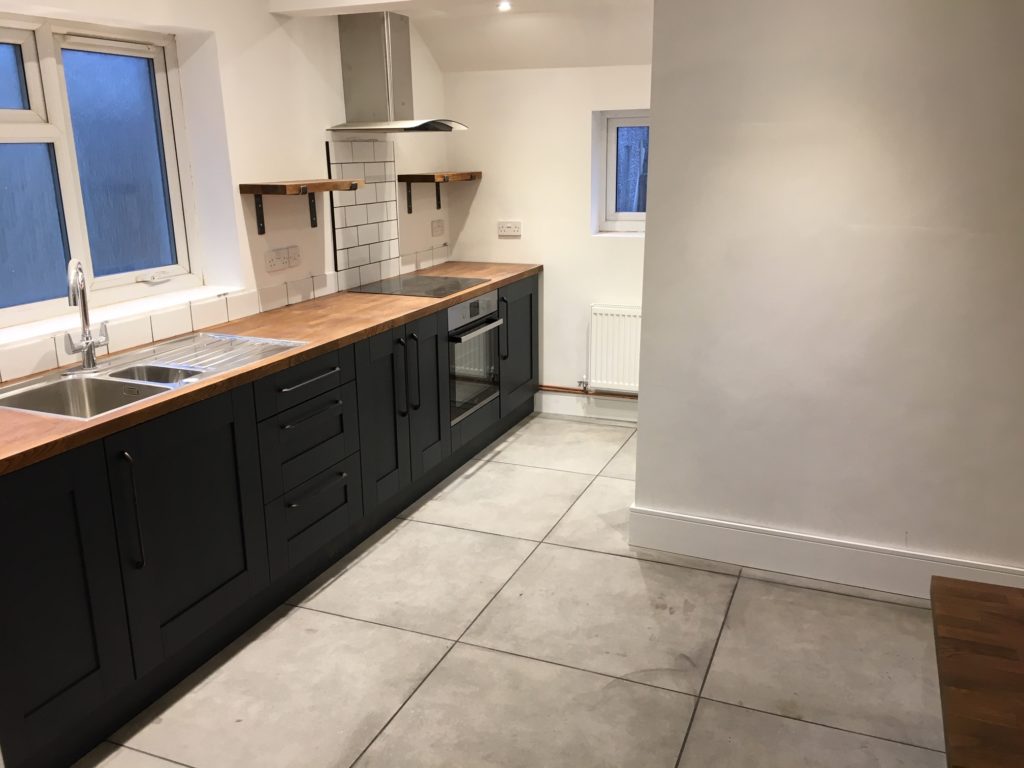 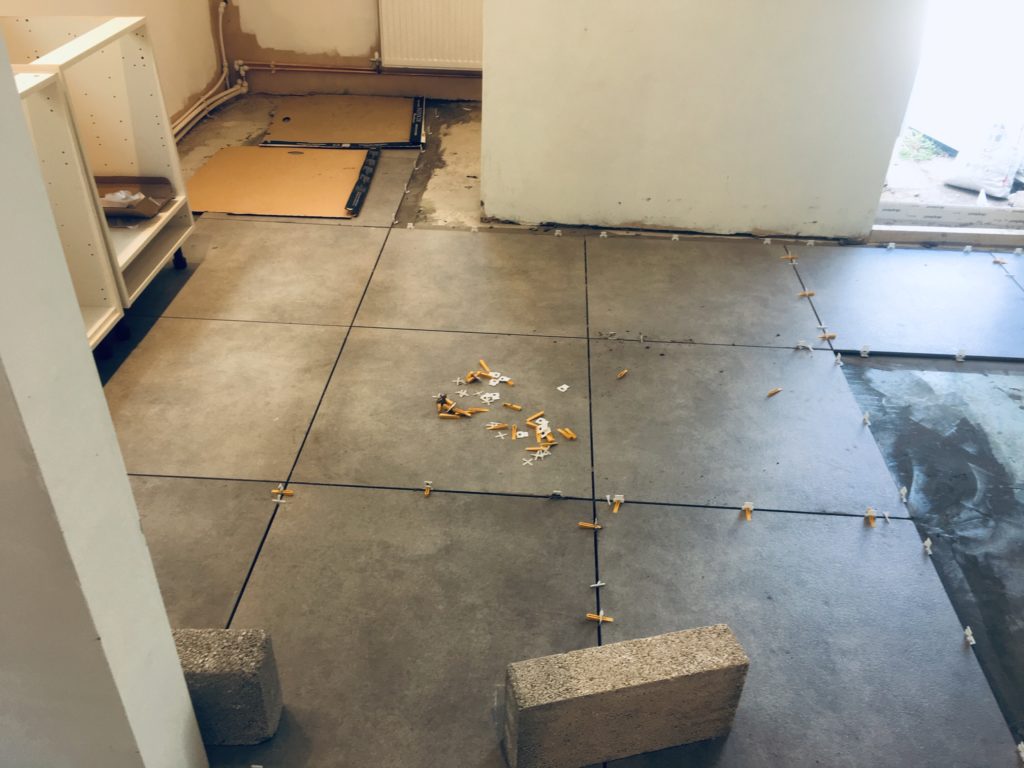 Throughout the project there were several setbacks including having to put a new frame on the stairs and bathroom ceiling because of bowing. The biggest setback was the kitchen floor though, I had laid 7 tiles before I decided I needed to re level the floor, meaning I had to rip the new tiles up. Getting the dried adhesive up was almost as hard as removing the original tiles from the floor, I was half tempted to leave the floor exposed once levelled and the fresh concrete finish looked good. 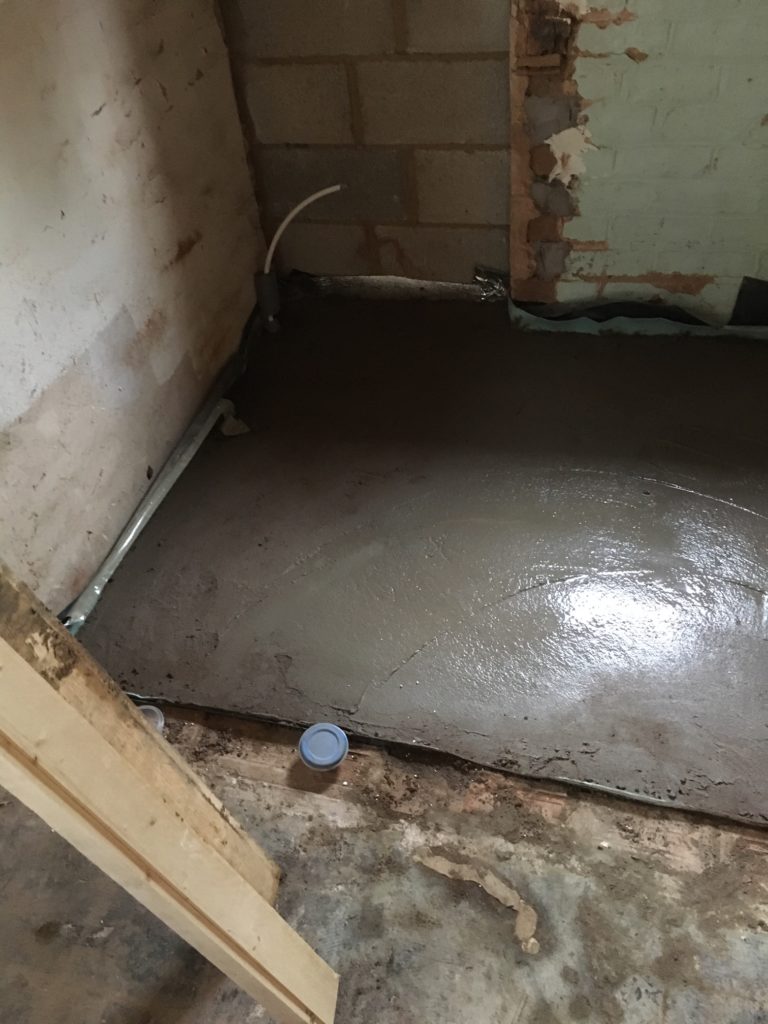 Knocking out the fireplaces gave me an opportunity to make a feature out of one, as soon as I knocked it out I knew I was going to tile it. The stove heater sets the teal tiles off nicely; I also used the left over kitchen floor tiles for the hearth. You could recreate this look using the 30×7.5cm Nirvana Blue. 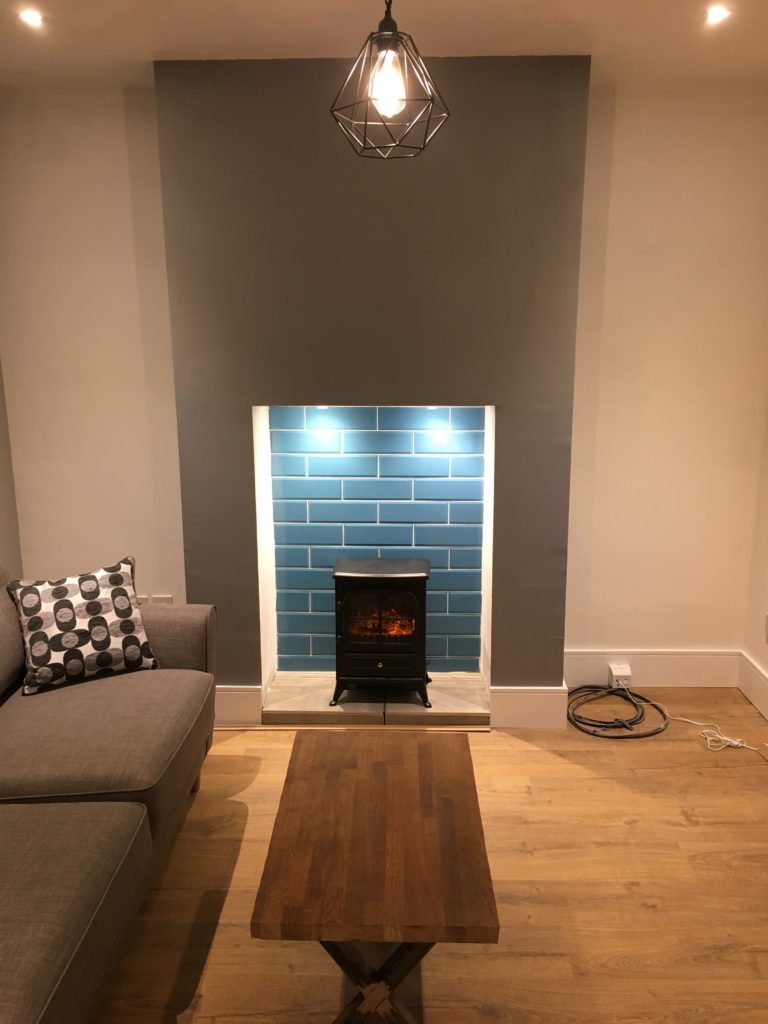 If I was to do the project again I would have installed underfloor heating, originally I thought it was a bit gimmicky but I do think I would have been a nice addition to have a warm floor. Maybe on the next project! 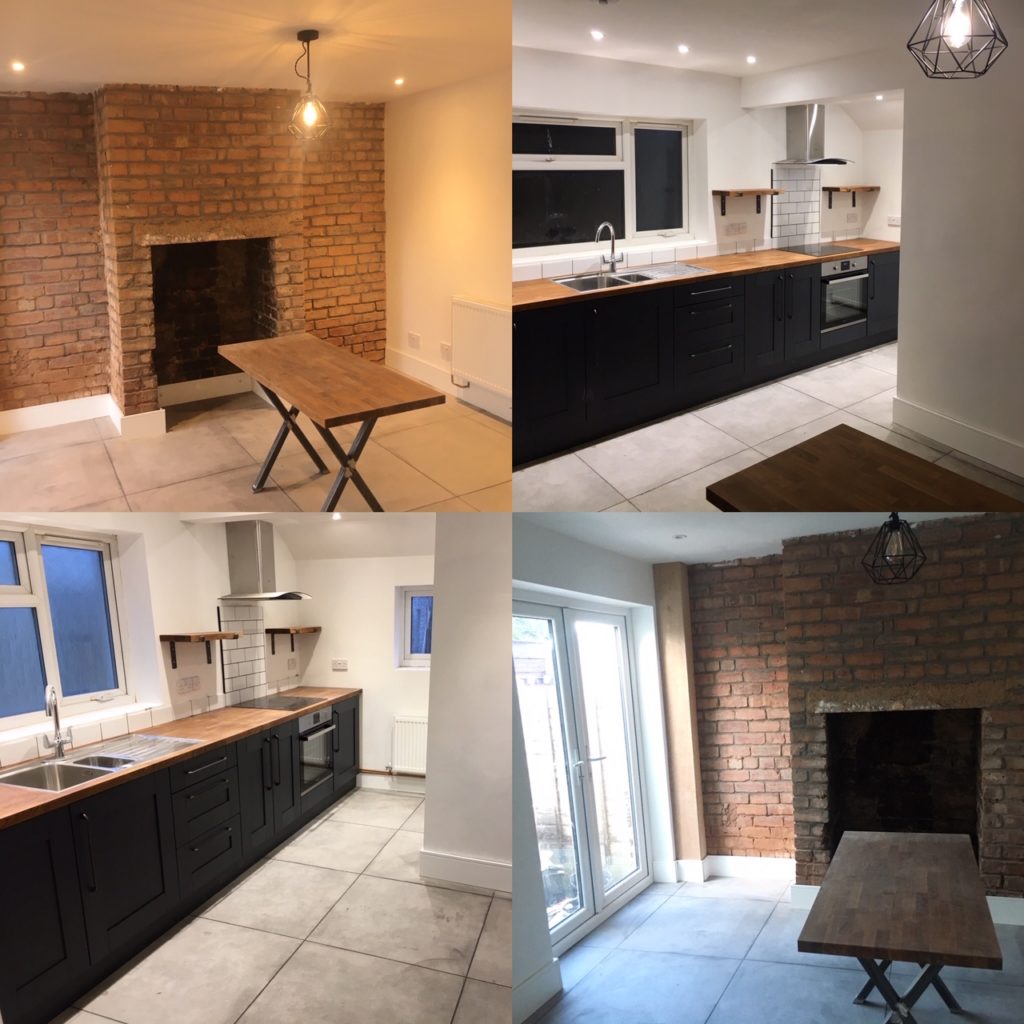 We would like to thank Matt for taking the time to share the details of his project. As anyone who has undertaken a renovation will know, they are rarely plain sailing and you have to be adaptable in your approach to building and design. More often than not budget will be a deciding factor, with so many tile options available now we are certain there will be something for your design scheme within budget.

We would love to hear from you if you have completed a project using our tiles.